brother Jim
Former Roman Catholic for more than 40 years, turned "Bible Catholic" believing God's word that Jesus came to truly and completely save those who believe in him.

Roman Church teaches no assurance of heaven because of our free will. They call Jesus "Lord" but ignore his promises. 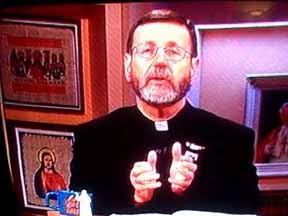 A pointed illustration of the sad state of what once was the true church. Now it is no more than a giant monster that doesn't even know the assurance of salvation the Lord purchased for those who believe in him and his completed work on the cross.

(The following word-for-word transcript comes from the show "Threshhold of Hope" which aired live on EWTN-TV Tuesday, Sept. 1, 2009 at 9 p.m. C.D.T.).

The show begins with Pacwa answering a few questions submitted from viewers at home:

Dear Father Mitch,
On another EWTN show (The Journey Home), someone told a story where he asked the local priest if he was saved and the priest replied “Only God knows who is going to heaven.” What can a Catholic, who believes in Jesus Christ and is living in obedience to God, hope to expect regarding salvation and going to heaven? Richard from California

Pacwa word-for-word answer: Well, here’s one of the things. The Catholic Church says you….we don’t have absolute assurance of our salvation, but we can have moral assurance.

Now, what are we talking about there? Absolute assurance is one that comes in some denominations where they, first of all, have begun the whole process by denying freewill to choose grace.

Now, in that kind of understanding, then, if you get the grace of faith, it’s because God gave it to you and made you take it…cause you can’t choose it on your own (hands back up in the air in exasperation).

The Catholic position is, we know what Christ has taught, including a, a,a, we know some things he didn’t say. He never said you are justified by faith alone, allrighttt?

So…that would be one thing. You know, not justified by faith alone…but you are justified by faith and you are saved by hope, and unless you eat my body and drink my blood, you cannot have eternal life. And we also see in 1 Peter, chapter 3, aaa around verse 19, “baptism now saves you.”

So, what we know is that our Lord has given us this richness of salvation, and in giving us that richness, he has also given us the ability to say that, well, if I do believe, if I have accepted these gifts he’s offered me, then I can be sure, you know, rrrelatively sure, or morally certain that I am going to go to heaven. And you can accept that that’s where I’m going to go. Of course, most people are aware, I don’t deserve it. Y’know, who deserves to go to heaven? I mean, yyyou can’t go on saying “I believe and therefore I deserve,”…nobody, not, not, Protestants, not Catholics believe that.

It’s not a matter…it’s a free gift, it’s God’s grace. But, you also have a sense of being able to say that “I have done what Christ has asked of me, to the best of my ability and I hand myself, I commend myself to him…and pray like the publican, “Lord have mercy on me a sinner.” And we can trust in his mercy. So we can have that kind of confidence.

The only reason we don’t like to say it is “absolute” is that…going back to the first thing I mentioned, we do believe in free will. And, because we believe in free will, we as Catholics, believe we chose—matter of fact—many Protestants also believe this now—they don’t follow Luther or Calvin. And they do…Billy Graham for instance, says “Make a decision for Christ.” Now, that would be contrary to Luther and Calvin, because they say that you CAN’T make a decision, but many Protestants know, of course, you make a decision for Christ. And they do that, invite Jesus into their life—motivated by grace and moved by grace—just as we (Catholics) believe. But, what we also believe, is that, while we make a decision for Christ, we still have freedom to turn away from him. So we don’t ever claim absolute assurance. As if, “once I am saved, I am always saved.” We gave a sense that, God has given me this grace, and all these many graces, and I want to do everything I can to preserve until the end. And, by preserving, a, a —read Hebrews by the way—chapter 10, beginning right around verse 20 or so. You see that that need for perseverance is essential, so that we stay faithful all the way to the end. - Mitch Pacwa

Mitch Pacwa is so well educated that it is sad to hear his halting response to a very basic question. It is all the more sad to listen to this error of "free will" and see how it so thoroughly twists the gospel of Roman Catholicism. At the very least, Pacwa's explanation seems to be undermined by a "free willingness" to totally ignore scripture and the centrality of Christ. Please see my series of responses, which I will start posting tomorrow on Sept. 4, 2009.

Posted by brother Jim at 8:23 PM No comments: